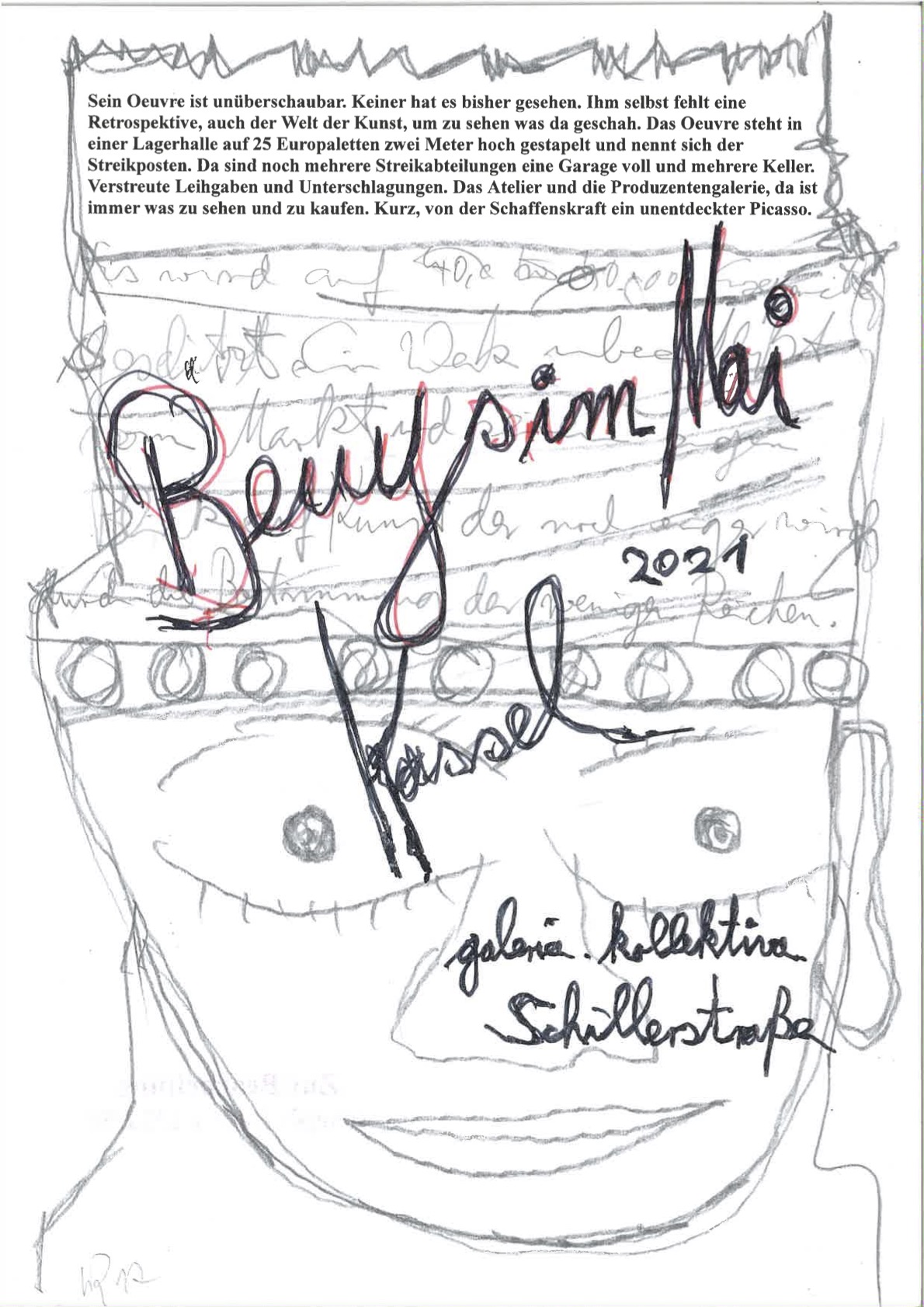 In the Galeria.Kollektiva, Schiller Street 30, takes place from 10. to 16. May a process-based permanent performance with the Berlin artist Rainer Wieczorek for 100. Birthday of Joseph Beuys, which can be seen through the panes day and night.

work in progress and delays

at the Isou's table

In celebration of the 100. Birthday of Joseph Beuys on 12. May the Berlin artist Rainer Wieczorek will spend the second week of May in Kassel. In the Galeria.Kollektiva, Schiller Street 30, show Wiecorek and his “Freundeskreis KUNSTdemokratie” from 10. to 16. May an exhibition with a shop window character. Evening: “The audience will process the central work concepts of Joseph Beuys as ‘work in progress’ experience.”

The qualified sociologist Wieczorek is pandemic-proof – Can be seen by passers-by from Erzbergestraße and Schillerstraße – Live painting, light- and room installations, Drawing actions, try it, social sculpture and music with social and political aspects. Behind the shop window it will be his “Beuys files” open and deal with the work of the master in a complex manner.

Also the project "Heimat 10.000", that Wieczorek has been following for a long time, is presented. It is about proposed solutions to the housing shortage. Works of art for the homeless are created, which will be auctioned in September in cooperation with the social aid association “Panama”.

Beuys was a Fluxus artist and the music of Fluxus played an essential role in many actions. Heiko Welker (Berlin) performs romantic songs for the coyote on Friday evenings and Saturday afternoons. Romantic poems are played on the guitar – in its own interpretation and setting.
At the end there will be a small Fluxus concert on Sunday morning as street sound.

Am 12. Mai erleben Sie ihr blaues Wunder. The edible city gives away the blue splendor – 100 IPOMEA- Winches to take away at the "fensterzumhof".

The Berlin artist Yongtak Choi relies on KolorCubes e.V. a wall design at the Arnold Bode School (Facade on Schillerstrasse 16) with a photo-realistic Beuys portrait. The black and white mural offers the possibility, To meet Beuys at eye level.

As a result of Rainer Wieczorek's call to the 100. Joseph Beuys' birthday is almost so far 100 Birthday greetings with ideas and interpretations about Beuys from all over the world arrived in the Schillerviertel, from greeting cards with Beuys quotes to elaborate collages. The variety of designs is overwhelming. Even adventurous mailings have found their way into the mailbox, although they certainly did not always correspond to the norm.
The greetings will be off 12. May in the “Galeria.Kollektiva” and to be marveled at in the porter's house in the Schiller-Carree.

PHOTO STOP in the Schillerviertel – “When it comes to art, one has to refer to a term, which encompasses all of human creativity, who is not content with the term art in the narrower sense. " (Beuys 1985). In keeping with this central statement from Beuys, the photographers Christian Kopetzki, Werner Maschmann and Thomas Wiegandab from 1. May short Beuys quotes with alternating photo sequences in the 4 Combine showcases of the course. The big birthday party is on the weekend of 17. and 18. September postponed. Therefore Wieczorek is from 13. to 19. September come back to Kassel and in the”galeria.kollektiva” exhibit and perform. Then there should be workshops with audience participation and a cooking performance without lockdown.