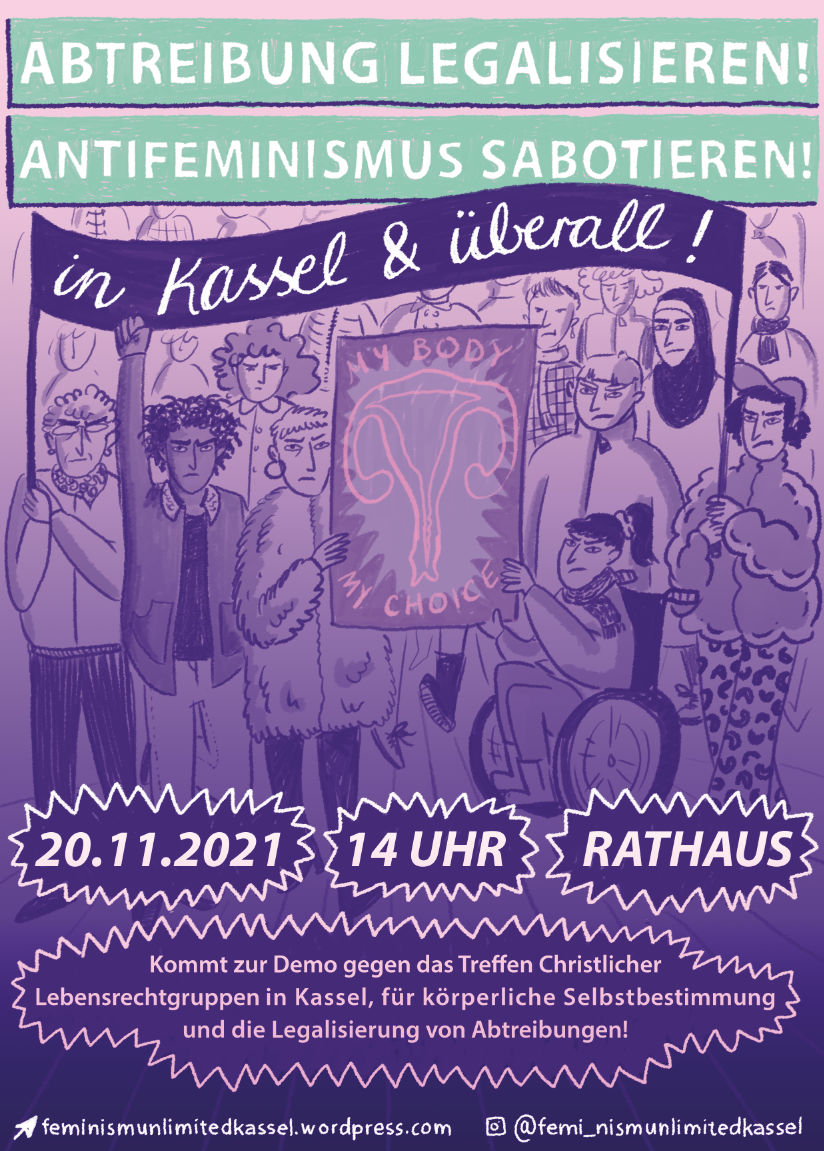 Legalize abortion – Sabotaging anti-feminism! In Kassel & all over!
20.11. Demo, 14 Clock
starting point: at the city Hall
The End: at the Friedenshof, where the right to live forum (probably) takes place

Together we would like to 20.11.2020 Demonstrate for physical self-determination and against religious-fundamentalist influence on the decision about our bodies and lives.

150 Years of criminalization of abortion by §218 are enough! 1871 it was written in the penal code, it is time, that he disappears and the propaganda of the protection of life movement with it!

Largely undiscovered by the general public, the meeting organizes Christian right to life groups (TCLG) also this year in Kassel their "Right to Live Forum". With well-known representatives:Within the German “life protection movement”, the network advises on strategies, how they can spread their anti-feminist and hostile positions in society.
We don't want to leave that unchallenged! Am 20.11. let's go out into the street! This time the event of the TCLG is under the topic "25 years of revision of § 218". Under the guise of protecting life, the TCLG calls for a comprehensive ban on abortions. You want to restrict the physical self-determination of all people, who decide not to conceive. In doing so, they are directed against the physical self-determination of pregnant women and against a life, in which we can make our decisions freely and independently. You represent a conservative view of the family and reject lifestyles, not the heterosexual ones, correspond to the bisexual norm. You are against feminist and emancipatory demands for a society based on solidarity, in which people can live and love like this, as you want and in which we collectively shape our coexistence. This means “life protectors:inside ”in a number of positions of the extreme right. Even if they show themselves outwardly as a people-loving Christian:give inside, let it happen, that AfD politician:run inside on their demos. A fight against life protectors:inside there is also a fight against growing anti-feminism! For this reason we go on 20. November took to the streets in Kassel and demonstrated against anti-feminism and for the legalization of abortions!
Demonstrate with us and stand against anti-feminism and the restriction of our bodies and our lives!

We demand the deletion of §218 and §219 without replacement!
We call for complete impunity for abortion!
We demand effective protection against forced sterilization for trans * and inter * children as well as disabled people!
We demand a self-determined approach to sexuality!
We demand the recognition of different gender identities, Sexualities and parenting - also outside of the heterosexual norm!
We demand an emancipated sex education!
Come and demonstrate with us for self-determination and against fundamentalist influence on our bodies and lives!