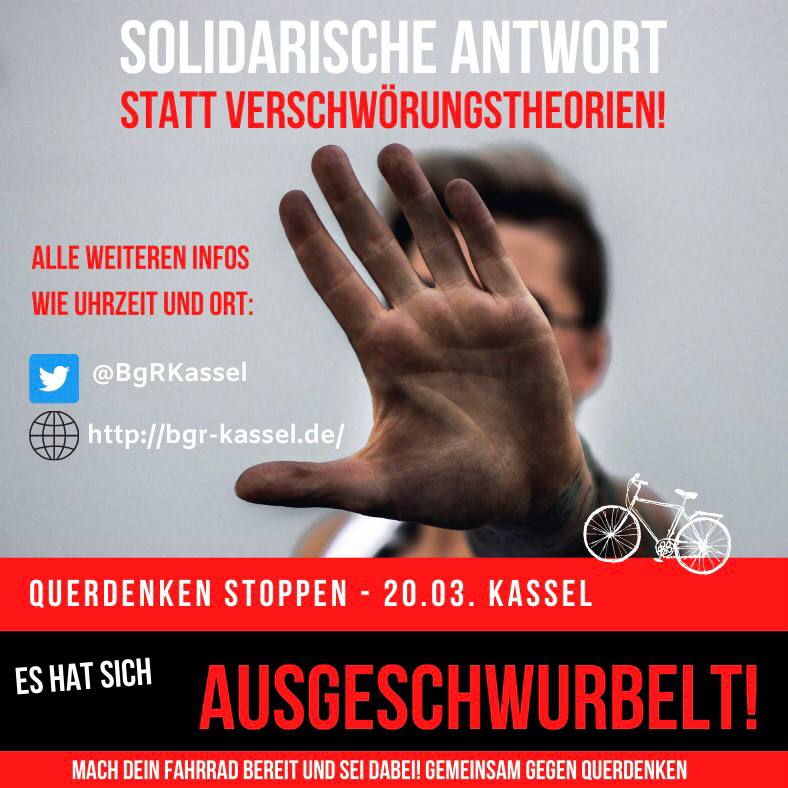 Organized by BgR-Kassel (Alliance against the Right)

More information on the exact course of the action soon:
www.bgr-kassel.de

Under the melodious title “Worldwide demonstration for freedom, Peace and Democracy "calls out a group of" Free Citizens Kassel ", but they have their contact address in Fulda ", on Saturday, the 20. March 2021 to a "large demonstration" against the federal corona measures- and state governments. A rally is planned in the Karlsaue with a subsequent elevator through the city. In an interview with themselves, the notifying parties announced, that they supposedly 17.500 People expect. Individual groups of unconventional thinkers call for Kassel. At the same time, “success reports” are posted daily on the social media channel, which are supposed to suggest, as if it were actually about a "worldwide" movement.

One could dismiss this as megalomania. However, the organizations in the “Alliance against the Right” see such corona denier actions as an attack on social cohesion in our city. The corona deniers themselves have refuted their claim several times, they stand for freedom and democracy, through their health-endangering behavior and the theses expressed. On Saturday they showed at their marches, among other things. in Dresden, that they do not stop at violence against journalists and the police. At previous appearances by these groups, conspiracy theories were combined in their speeches, racist and anti-Semitic stereotypes even with historical falsification ("Jana from Kassel", who thinks she is Sophie Scholl).

We expect from the city administration, that it not only formulates the corona-related hygiene requirements for the applicants, but also takes care of it, that these are adhered to. We know, that earlier mass marches by corona deniers contributed to this, to drive up the number of infections.

At the same time, we will act as an alliance against the right with a Corona-compliant public campaign on 20. March 2021 from 11:00 h make it clear on Opernplatz, that in our city there is no place for racism and conspiracy theories.

More details will follow in the coming days www.bgr-kassel.de.