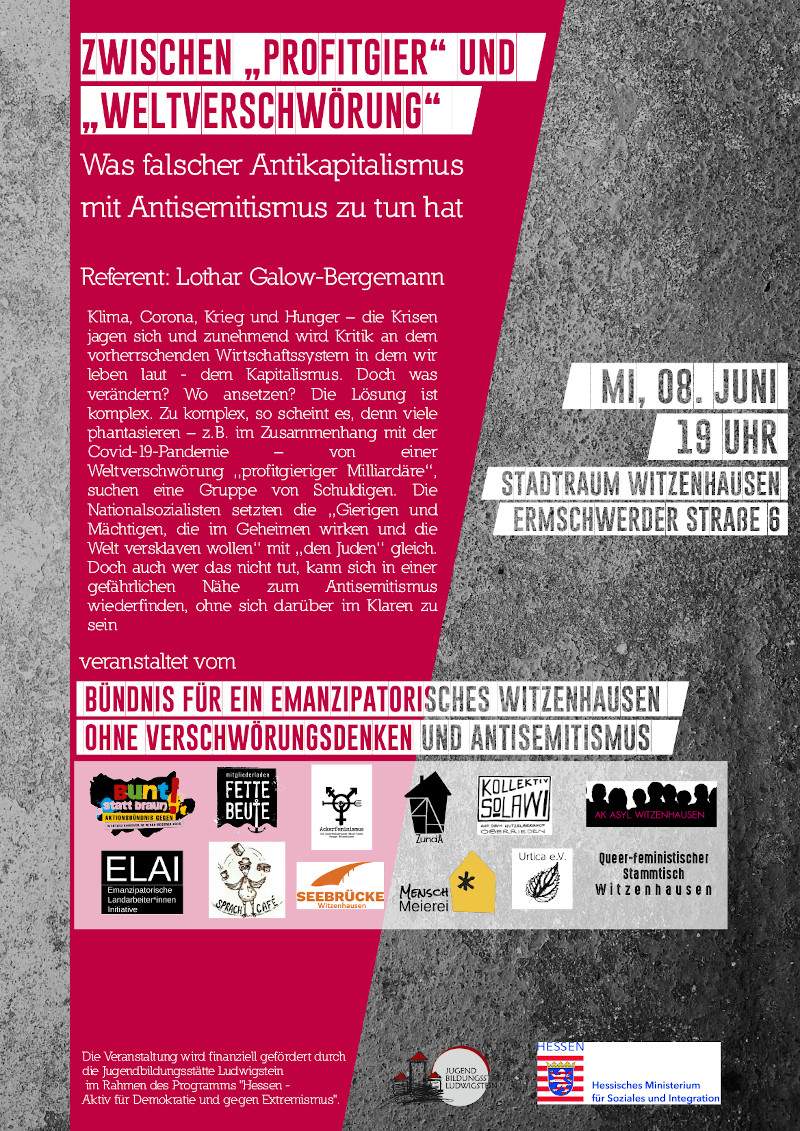 Air conditioning, Corona, War and hunger – the crises are chasing each other. They have a lot to do with the prevailing economic system – capitalism. Infinite growth is more important to him than people and nature, maximum profit more important than health and quality of life, rising share prices more important than the lives of future generations. Capitalism has led us to a dead end. Many are against him, but they also understood him?

Social criticism is often met with anger at "the culprits", “pack of lies” and “press of lies” confused. Many fantasize – e.g. in connection with the Covid-19 pandemic – by a world conspiracy of “profit-hungry billionaires”, those who want to plunge them into misfortune. The National Socialists put the imaginary “greedy and powerful, who work in secret and want to enslave the world” with “the Jews”.. But even those who don't, may be dangerously close to anti-Semitism, without realizing it.

Many believe, they are resistant to anti-Semitism, because they are anti-racists. But anti-Semitism is something completely different from racism. It is a world explanation system with anti-capitalist claims, that didn't understand anything about capitalism. Also left, who do not see through the abstract form of domination of the market and capital and speak of "the profit-hungry capitalist class"., didn't understand capitalism. They are rarely anti-Semites, but often prone to anti-Semitic thought patterns. The left's past and present is full of examples of this.

Simple explanations of the world and conspiracy fantasies are booming in times of crisis. Was corona denial the end of the road? What delusion will supposed "lateral thinking" still produce? What can be opposed to that? A reflective critique of capitalism, which differs significantly from the prevailing gut anti-capitalism, is needed today more than ever.

Alliance for an emancipatory Witzenhausen without conspiracy thinking and anti-Semitism

Add to calendar! (iCal-Export in Kalender)