Am 14.11.2020 gathered around 250 Demonstrators in front of the town hall under the motto “Legalize abortions! Sabotaging anti-feminism!- In Kassel and everywhere!“. A broad feminist alliance in solidarity with women and queers in Poland called for it.

The reason for the demonstration was originally the annual meeting of the association "Meetings of Christian Life Rights Groups" in Kassel.(TCLG). We reported on the corona-related cancellation of the so-called "Right to Live Forum" and the TCLG in one Interview with Feminism Unlimited Kassel (Fu*K). Unlike the meeting of anti-abortionists, the feminist protest was again able to carry many flags this year, Banners and posters can be successfully carried out onto the street.

In a speech by gynecologist Nora Szász, the many legal and bureaucratic hurdles were denounced, which make abortions difficult in Germany. According to this, Germany is pursuing one of the most restrictive policies on abortion in the EU. The common demand of the speakers was therefore the abolition of the paragraphs 218 and 219a of the Criminal Code.

Because of these paragraphs, people threaten, who make abortions and advising and informing doctors large amounts of money- up to jail terms. The ban on abortions made those affected sometimes life-threatening, improvised and therefore unsafe abortions.

In Hesse, abortions this year were even temporarily declared as unnecessary surgery due to the corona pandemic. Instead of these bans and sanctions, a right to self-determination about their own body was unanimously demanded of the demonstrators.

Other topics during the demonstration included marriage for all, the right of adoption and the enormous difficulty of changing names for non-binary people.
Reference was made several times to international feminist struggles such as in Kurdistan, the countries of Latin America, References to Poland or the USA.

In many countries these struggles are directed against a growing anti-feminism. A speech by the Women Defend Rojava group (WDR) described the situation as follows:

“Today we see ourselves religiously- towards conservative to fascist groups, which ultimately reduce women solely to their supposed childbearing ability. "

From the town hall the demonstration moved over the Königsplatz to the star and swelled up over it 300 Participants. A final greeting showed solidarity with the current actions of feminists in Poland. After the right to abortion was abolished there by constitutional court ruling, Tens of thousands took part in feminist strikes and large-scale demonstrations there.

The current development in Poland also shows, the danger posed by anti-feminist currents and the need for a large international feminist movement. 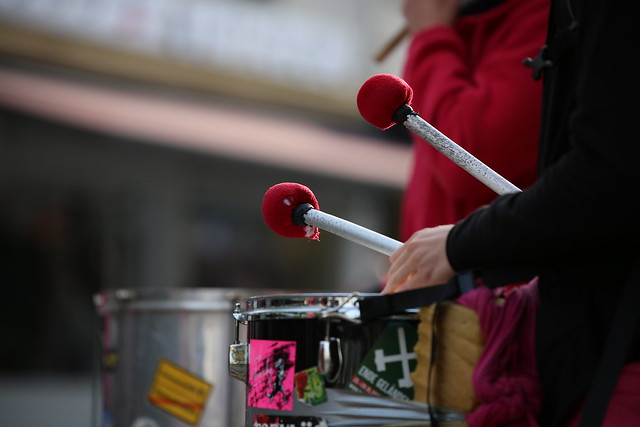