4500 People followed on 24. September 2021 the call of Fridays for Future Kassel and took part in the nationwide major strike for consistent climate protection. This took place on the occasion of the upcoming federal elections on 26. September.

The opening rally in front of the main train station began with speeches and musical accompaniment by Max Frederic Remmert. Climate protection should not be left to the market and carried out at the expense of poor people, emphasized activists of Fridays for Future Kassel in her speech. With the watchword “Strike in the school Strike in the factory, that is our answer to your policy” they finished their speech.

Led by a drum group, the demonstration then moved through the city center to Friedrichsplatz, where for two weeks that Kasseler Klimacamp takes place. Back at the main train station, the demonstration was concluded with further speeches and musical contributions.

Only the banners and flags of the demonstrators showed, how many different groups and political actors are part of the climate justice movement. Flags of different "for future"- Groups like "Scientists for Future", „Churches for Future“, “Students for Future” and the working group for rural agriculture, Greenpeace and # keineA44 were recognizable. Some had a pier or IG Metall- Flags included. Signatures were collected for the petition on the traffic turnaround in Hesse and the party “Die Linke” campaigned for free public transport.

In addition to appeals to the future government, to implement a socially just climate policy, but there were also voices, who emphasized the need for fundamental social change. That there is still a lot to be done in Kassel with regard to climate protection, showed up right after the start of the demonstration: The number of cars, that were temporarily stopped by the demo, rose rapidly within minutes. After a short time, the streets were half filled with demonstrators and half with waiting cars. 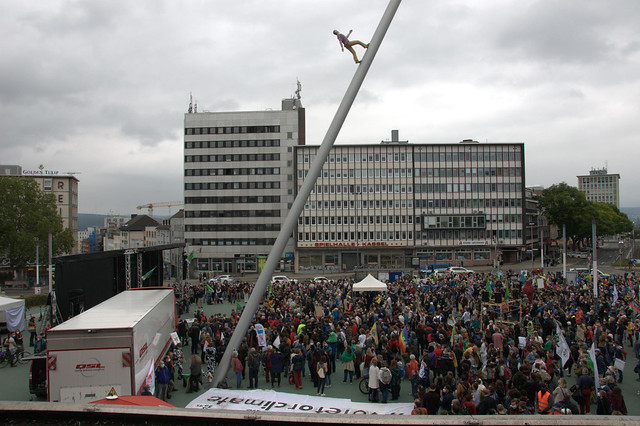