Freedom for Lina demonstration in Kassel

The demonstration moved from the town hall through the pedestrian zone, via Königsplatz and Stern, finally to the north of the city and ended in the north of the city park. Especially in the city center, they took a lot of time, to get in touch with passers-by and distribute leaflets, explained someone from the solos group. That is necessary, because many people would only know the lurid reporting of the big media houses. It has become a little less in the course of the last few months, but little has changed in terms of the general tone. Lina is presented as a supposed terrorist.

“To this end, the Federal Prosecutor's Office and the Saxon police are deliberately staging a grotesque drama, that is simply taken up in large parts of the German media landscape, is reproduced unquestioningly and is spun on by oneself. "

From the call for a demonstration

The lurid and sexist reporting also denounced Lina's mother in a greeting, which was read out at the demonstration. Lina is stylized as a terrorist by the Federal Public Prosecutor's Office and because she is a woman, overturn the reporting. This representation was also criticized in public in a further speech. For some, Lina is a "petite woman in a mini skirt with painted fingernails", for others the "most dangerous left in Germany". The start of the process is now imminent.

The approaching first day of the trial on 8. September had also chosen the Kassel soli group as an occasion for their demonstration. You expect one of "the largest and most significant trials against anti-fascists in the last decades", it said in the call. They actually are for the process, which is now also referred to as the “Antifa Ost” process, negotiation days have already been set until the end of March. As it was to be expected, there is also great media interest: The Dresden Higher Regional Court announced at the end of August, that all 25 Seats available for media representatives are reserved.

In order to support Lina and the other accused in the upcoming “Antifa Ost” proceedings, a support group has also come together in Kassel over the past few months.

“As part of the open Antifa meeting, we organized an information event on Lina's detention situation and the whole process, there came close 100 People. That was very moving and the interest was great. People kept asking about that: Where can i help, how can I support Lina? Since then we have met regularly as a solidarity group and, for example, have now organized the demonstration on Saturday, or take care of the joint journey from Kassel to the start of the process in Dresden or to Wir Sind Alle Linx- Demonstration in Leipzig. "

Picture gallery for the demonstration 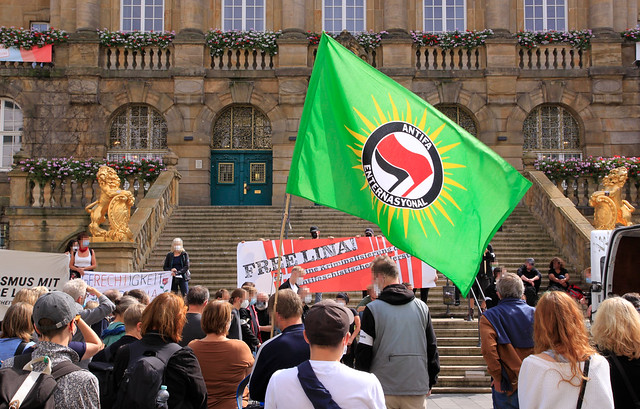