More than 150 Activists met on Saturday, the 26.03.2022 came together for an action conference in Kassel's Kulturbahnhof. Against the background of the upcoming action week in summer 2022 the participants discussed the connections between the climate crisis, war and rearmament.

The action conference should not only be used to plan the actions of the “Rheinmetall Disarm” alliance during the documentary summer 2022 advanced in Kassel, but also the exchange of content and strategy should be intensified. Against the background of the war in the Ukraine and the planned military build-up in the FRG, feminists were initially discussed at the opening event, climate policy and anti-militarist perspectives are discussed.

“Women and other oppressed genders feel the violence of war far more than cis men”, argued Kerstin Pfeiffer on the podium. Tamara Rewald adds from the perspective of the climate justice movement: “A Leopard 2 tank consumes as much diesel fuel as 1000 Autos, but it's not just about CO2 emissions, but from a societal perspective: we don't advocate for green tanks, but for no tanks at all.”

The activists then exchanged ideas in a workshop phase, how these perspectives can find space in a new anti-militarist strategy. In the late afternoon, the plans for actions and the camp during the action week were further advanced.

For the following Sunday, the 27. March, has "Rheinmetall Disarm" along with "End of Terrain", "Abolish Frontex" and "Fridays for Future" called for a day of action "Against War and the Climate Crisis".. In addition to protests in cities like Berlin, Bremen, Hamburg and Göttingen, there were also protests in Kassel against the war in Ukraine. Activists brought in front of the headquarters of the oil- and gas group Wintershall on the lettering "Natural gas kills".. Among other things, Wintershall imports natural gas from Russia. 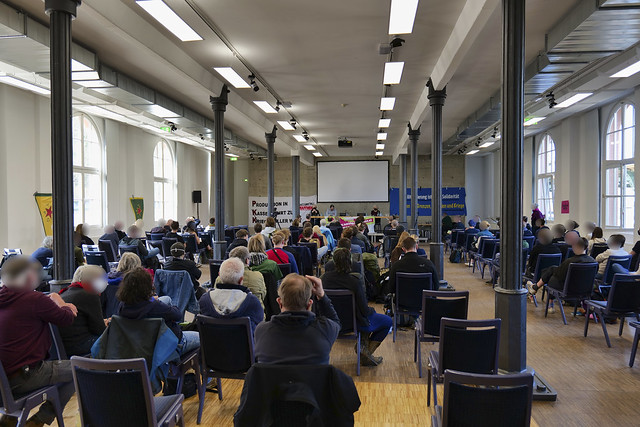