Hundreds of people came to Kassel on 19.2.21 to commemorate the anniversary of the racist terrorist attack in Hanau. Speeches were made on the steps of the town hall in mourning for Ferhat Unvar, Hamza Kurtović, Said Nesar Hashemi, Vili Viorel Păun, Mercedes Kierpacz, Kaloyan Velkov, Fatih Saracoglu, Sedat Gurbuz und Gokhan Gultekin gehalten. Had called among others Initiative 6. April from Kassel.

But the mourning for the victims of the attack was not alone. The pressing question about social circumstances, that made this act possible, was asked in every contribution.

So also in the speech of the initiative 19. February from Hanau:

“We are not ready, to be satisfied. We are not ready, to tell the story from Hanau only as a sorrow of what happened to us. We are indicting, that this suffering could have been prevented! With our voices and yours, we stand up to the cold, the ignorance and racism of the authorities, the police, and responsible policy. We know, we have to force a turning point from below. memory, justice, enlightenment, consequence!”

In Kassel, too, Halit Yozgat and Walter Lübcke were killed by racially motivated murders. Only in the middle 2020 came another racist attempted murder at the minicar driver Efe. 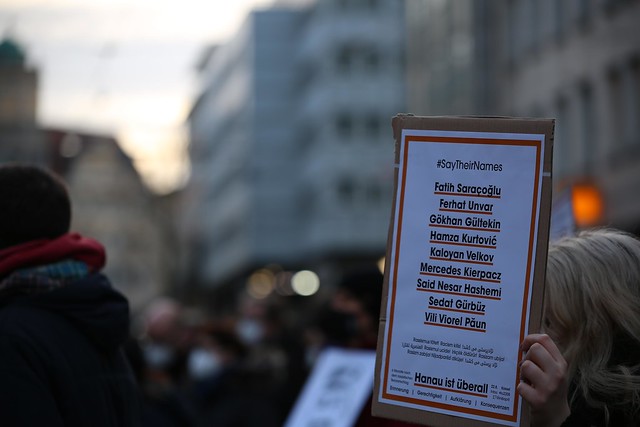