Since Thursday, the 24. September the general decree of the Vogelsbergkreis is available, the one eviction of the Occupation in the Dannenröder forest legitimized. To protest against the imminent evacuation and the clearing of the Dannröder forest made possible by it, have approx. 200 People made their way into the forest by bike from Kassel.

The bicycle parade drove the 84 km long route both on the country road, as well as over a section of the already completed A49. According to the call, the motorway should be made car-free for one day with the right to assemble. “It's proportionate, that we're blocking the cars here today, because what blocks a climate-friendly future, that is the car- centered system ", such an activist from "Wald instead of Asphalt" during the first stop on the motorway entrance near Gudensberg.

“It's proportionate, that we're blocking the cars here today, because what blocks a climate-friendly future, that is the car- centered system "

In various other speeches at the opening rally and during the first stop, black was on the climate-damaging policy- green state government pointed out. While the first consequences of climate change can be clearly felt, as the last forest status report by the Hessian Ministry of the Environment makes clear, the state government is still planning to clear a forest, to build a highway, so a spokesman in his speech. In other contributions, the necessity of a change in traffic away from fossil-fuel individual transport towards climate-friendly mobility was emphasized.

While the demonstration cycled towards the forest, People kept coming in and so the size of the bicycle parade grew steadily. Several music created the atmosphere- Boxing, that were transported on cargo bikes. That the driveway onto the autobahn near Gudensberg triggers such cheers among the participants, may not just have been because of it, that the car had to give way to the bike that day. Rather, driving freely on such a wide lane with so many people was visibly a great pleasure.

Because the forest is threatened, the events in the Dannenröder forest are concentrated. Various alliances and initiatives want to promote the preservation of the forest and consistent climate protection through a mobility transition with different campaigns: There are forest walks every Sunday, at which, according to the organizers, up to 1200 People participated. Am 03. October another bicycle demonstration will drive from Kassel via the A49 into the Dannenröder forest. Furthermore, the 04. October mobilized for a large demonstration to the Dannenröder forest. And last but not least, the squatters have been calling since then 24. September on, to get into the forest and prevent evacuation by permanent presence in the forest. 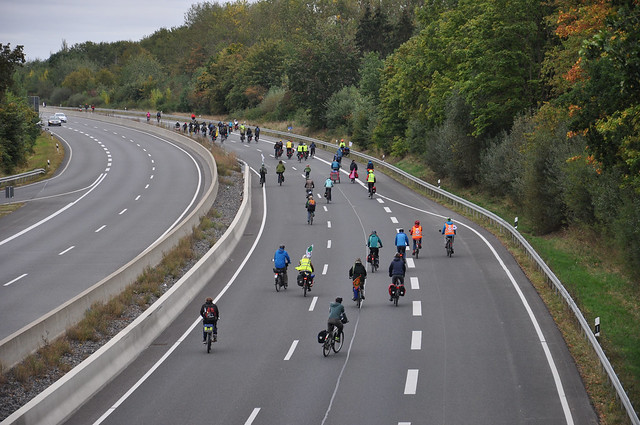 correction: The second bicycle demonstration will of course not take place – as originally stated – am 03. September, but on 03. October. That has now been corrected.